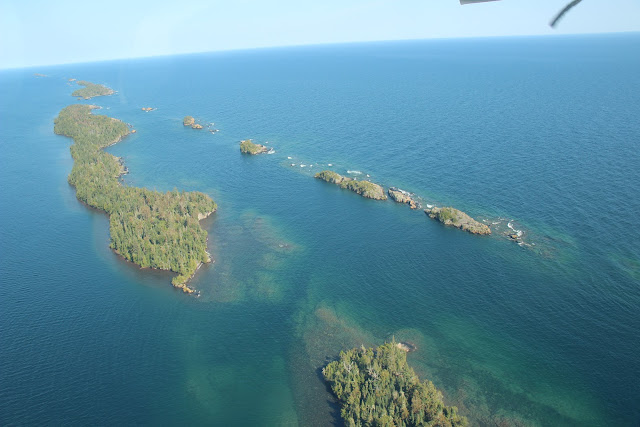 Isle Royale National Park is set on a series of islands off the coast of Michigan's Upper Peninsula. I was able to take this picture while leaving the island via seaplane this past Summer. I only had time for a day hike around the island, many visitors spend days on the island exploring its coastline and forests. The  islands in this photo are some of the smaller ones. I spent around 4 hours hiking and really saw only a sliver of the island.

I really like this shot, mostly because gives so much unique perspective. Notice how the waves shift direction around the islands? What about green areas just under the surface that aren't exposed (yet)? or even the vastness of Lake Superior?

I've taken a lot of other shots of our Michigan lakes and started a Google+ Collection check it out and follow!

Taken in one of the most surreal places I've been to: Badlands National Park in South Dakota, US.

When you are surrounded by ancient rocks, mountains, and rivers it can give us perspective. That is one of the reasons I enjoy traveling, the perspective. When we put ourselves in a new environment it forces our brains to break out of habits and think differently even if we don't like it! It is these new unique perspectives that help us move forward in life and get out of our mental ruts. One of the ruts that has always held me back is the fear of failure. A fear that the risks I take will never be worth it. With new perspectives it finally clicked for me: the consequences of my failures are so minor in the big picture, it can hardly even be considered a failure. On this massive planet, with all these stars, and all this time, if a business I create fails doesn't anyone even give a shit?

Everyone has their own trigger for reducing the fears of failure, the fear of risk. Mine was realizing how little failure really matters in the end. For others it may be realizing that failure is step on the path to success. For even others it may be a ridiculous over confidence that even wipes the word failure from our vocabulary. Whatever it is each person needs to find their own ah-ha moment. And new perspectives is what gives us that chance.

Why the Craft Beer Community is Heading in the Wrong Direction 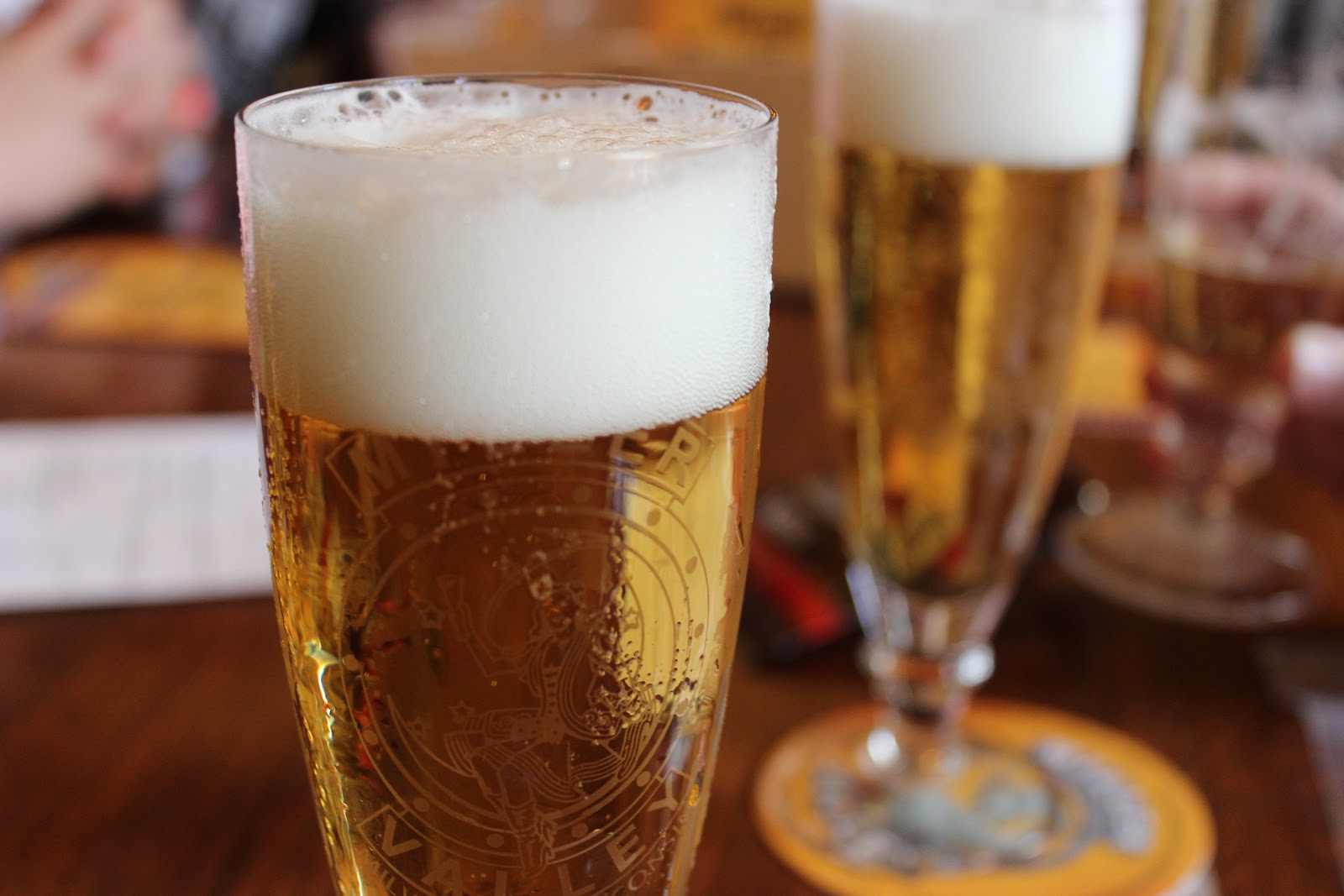 I took this picture in the historic Miller pub after touring the Miller brewery and cellars on Miller street in Milwaukee, WI.


Before I drop my unpopular rant let me clarify a few points.

5 years ago I was fearful that the craft beer community would pick up some of the negative points of the wine community:
And fuck me sideways with a growler; the beer community has done those exact 4 things.


These beer snobs are killing me.

Scenario 1:
Normal Human: Hey, I'm at this BBQ drinking Miller Lite! It's hot outside today, huh?
Typical Beer Snob: OMGWWTBBQ how can you drink that PISS, I would literally rather drink piss than than American adjunct lager you are enjoying. Don't you feel better about life now that I have told you what to like? You're welcome.

Scenario 2:
Typical Beer Snob at gathering: What?! you only have Bud Light? You have good food, why not good beer! I cannot drink this, I'd rather pout in the corner with a diet cola and tell everyone about the things they are missing out on in beer life. I have it all figured out!

Scenario 3:
Newbie at craft beer store: "I've heard a lot about this store but I'm not much of a beer drinker. Can you give me something like bud light to get me started?"
Snob: snicker one of those, huh? Why don't you go drink a "blue moon" you can pretend that is craft, OK?

Scenario 4:
Brewery makes super limited edition bourbon barrel aged maple infused imperial stout (of course I am very OK with this). But then the beer is a limited release, $20 for a 22oz bomber, and has cute name.  The community lusts over it simply because of its rarity without even tasting it themselves. In small quantities this is OK, but it is becoming more and more common which increases exclusivity.

There is nothing wrong with a special occasion beer.

Make beer, charge a reasonable price, and enjoy. I understand there is costs in aging, cellaring, and  ingredients; but many of these exotic beers are high priced only due to the 'black market'. That market exists due to limited supply and the hype. I mostly blame the community, not the breweries. It's the community that rants and raves and builds hype about exclusivity. More importantly it is the community  that  is willing to pay these prices.

That attitude may work in the wine industry, I don't know, maybe it is their schtick (I blame the French). But beer isn't like that. Beer is the everyman drink. Beer is inclusive, not exclusive. Everyone can enjoy whatever the fuck they want (weather it is triple IPAs or American adjunct lager) without being ostracized by the community. I do not blame (most) breweries in this situation, many are set up as businesses (as they should) and want to make money. Many breweries are not put in place to make the world a better place (even if they do). It is all the bandwagon fans that jump on whatever latest trend is, and scoff at people who think different. The same vile fanboy-ism that plagues Android vs. Apple.

It's like craft beer is becoming a Religion, or a political view, or a mindset. Luckily these snobs are still very much the minority of beer people. We can still stop it from spreading!

I propose we abolish of the term "craft beer".

It has gotten watered down over the years anyways. A criteria for defining a craft brewery is added every year, and half the 'criteria' are based on the companies majority ownership or quantity of production (Wait, so is Goose Island still craft? What about Sam Adams... Sierra Nevada? I can't even keep track). The criteria isn't completely based off the quality or care put into the product. Beer is beer. Some taste better to others depending on your personal subjective tastes, Some beers are higher in ABV, some use special ingredients, some pair well with cheese, and some taste amazing in a boat. All of those beers are better than a not-beer.

Remember: Just fucking drink what you enjoy, have an open mind, and don't criticize other's personal choices based on subjective measurements. Educate if you want (in a positive way), but leave it at that.

Relax, don't worry, have any beer!

Summer in Michigan, the Best Summer There is 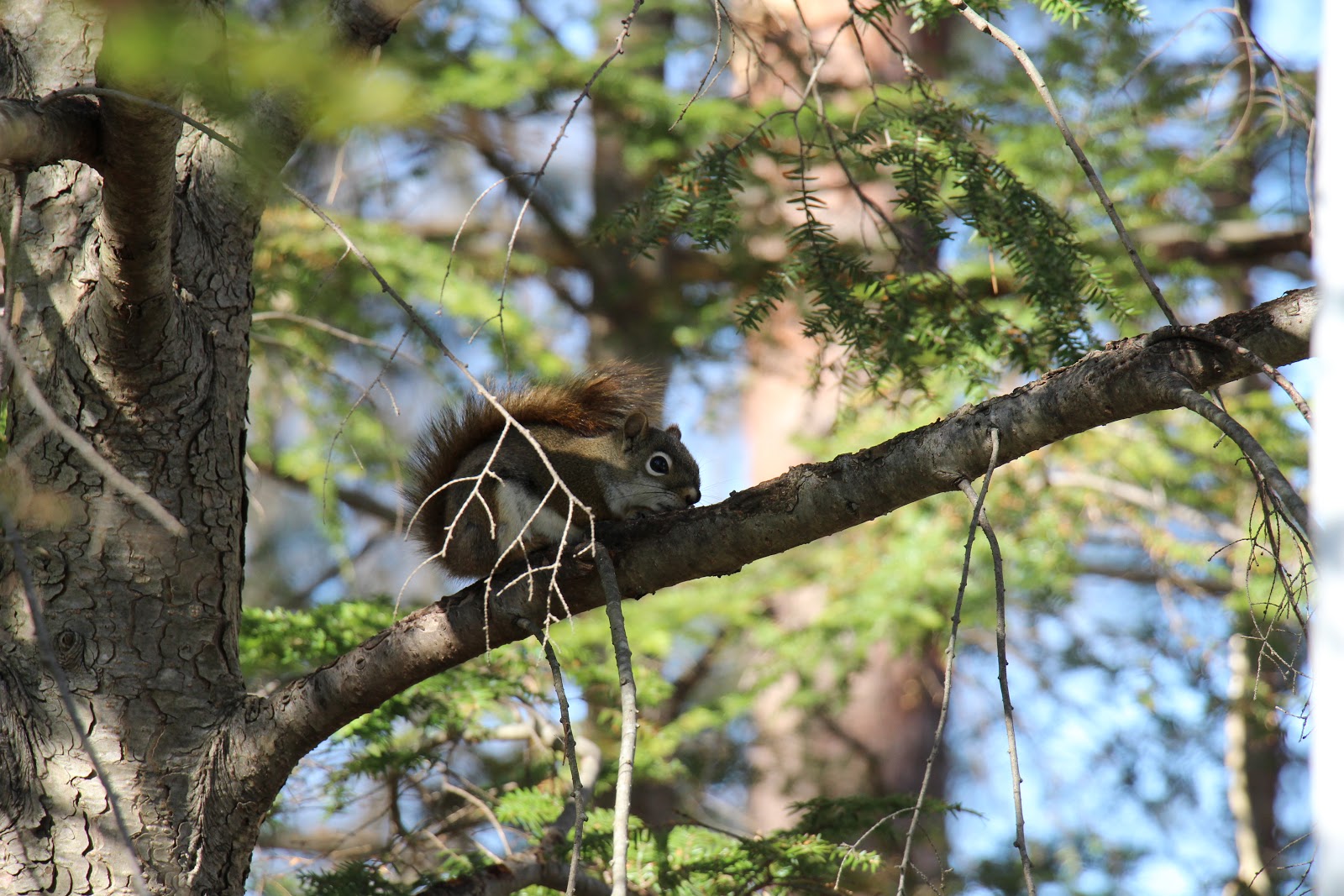 We are finally in the summer season here in Michigan! As we crawl out of the haze from our Seasonal Affective Disorder to bare our pasty skin for the first time let's remember what makes Michigan summers so special!

What are some of your favorite parts of Michigan Summer?

Image taken at Heritage Park in Farmington Hills, MI. This little guy wouldn't stop chirping at me from the tree, apparently he needed the attention! 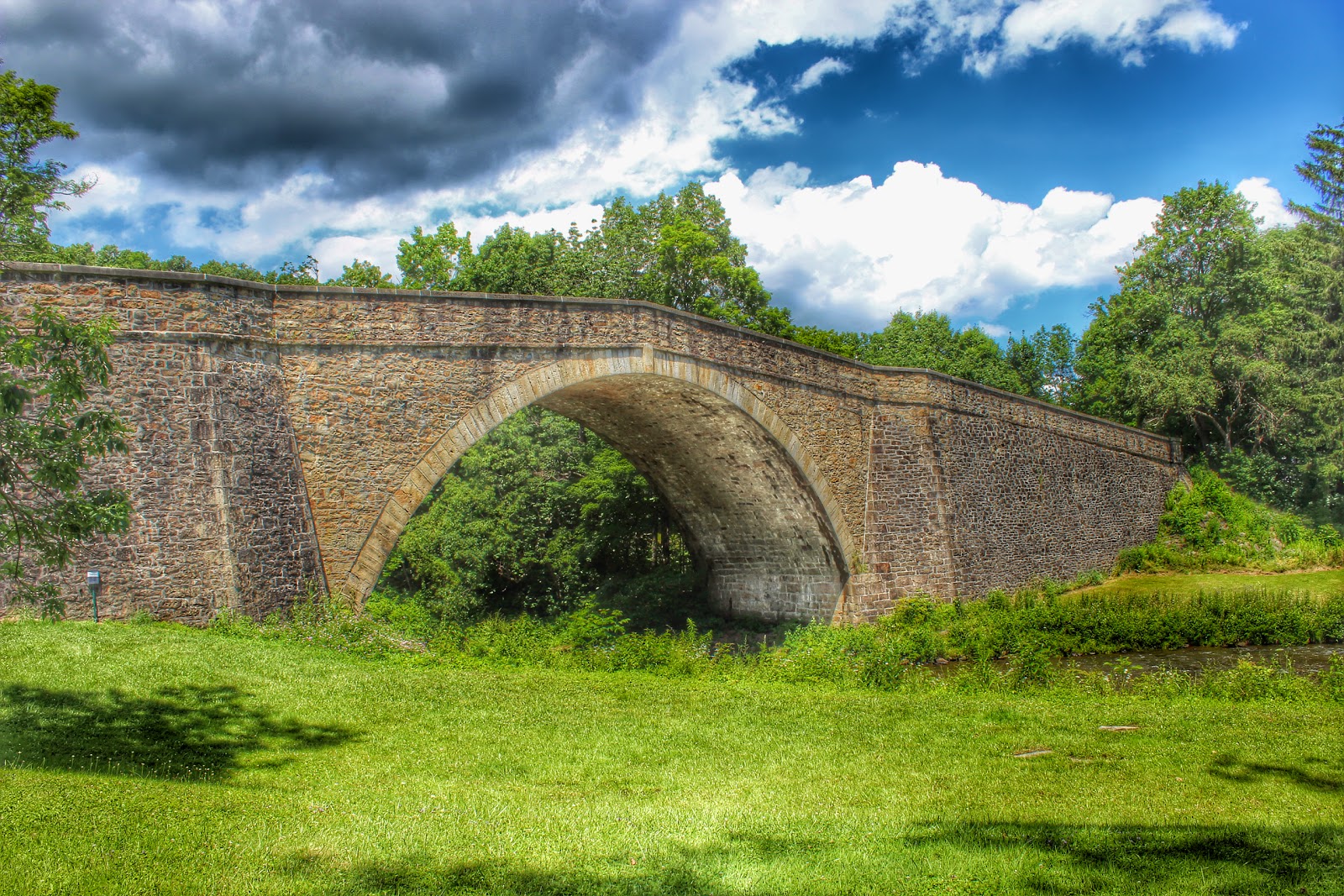 The Casselman Bridge (a U.S. National Historic Landmark) was completed in 1811. The high stone arch was to allow riverboats to pass underneath. Not many riverboats passed beneath it due to changes in riverboat traffic, and the slow phase in of rail roads.
For me, the most interesting part of the bridge was how it showcased the progression of travel in the US.

First you have the Casselman Bridge (mainly built for foot and carriage traffic, but also to allow riverboat traffic underneath). Second, a few hundred feet up the river, is a large rail road bridge. And finally just a few more feet up the river a modern interstate overpass. Our transportation in the US has changed quite a bit over the last 200 years (but the river hasn't)!

To the East of the bridge (a short walk) is Spruce Forest Artisan Village. This village is a collection of historic buildings brought to this site and houses a variety of artists. I found an amazing soap maker who owned a beautiful Maserati Coupe.
Further East is the Penn Alps, a historic building (and restaurant with gift shop) that dates back to 1818, and a grist mill.

This area is a gem and is recommended stop for anyone visiting near North Western Maryland.


Posted by Unknown No comments:

Trying To Survive The Worst Winter in Michigan History 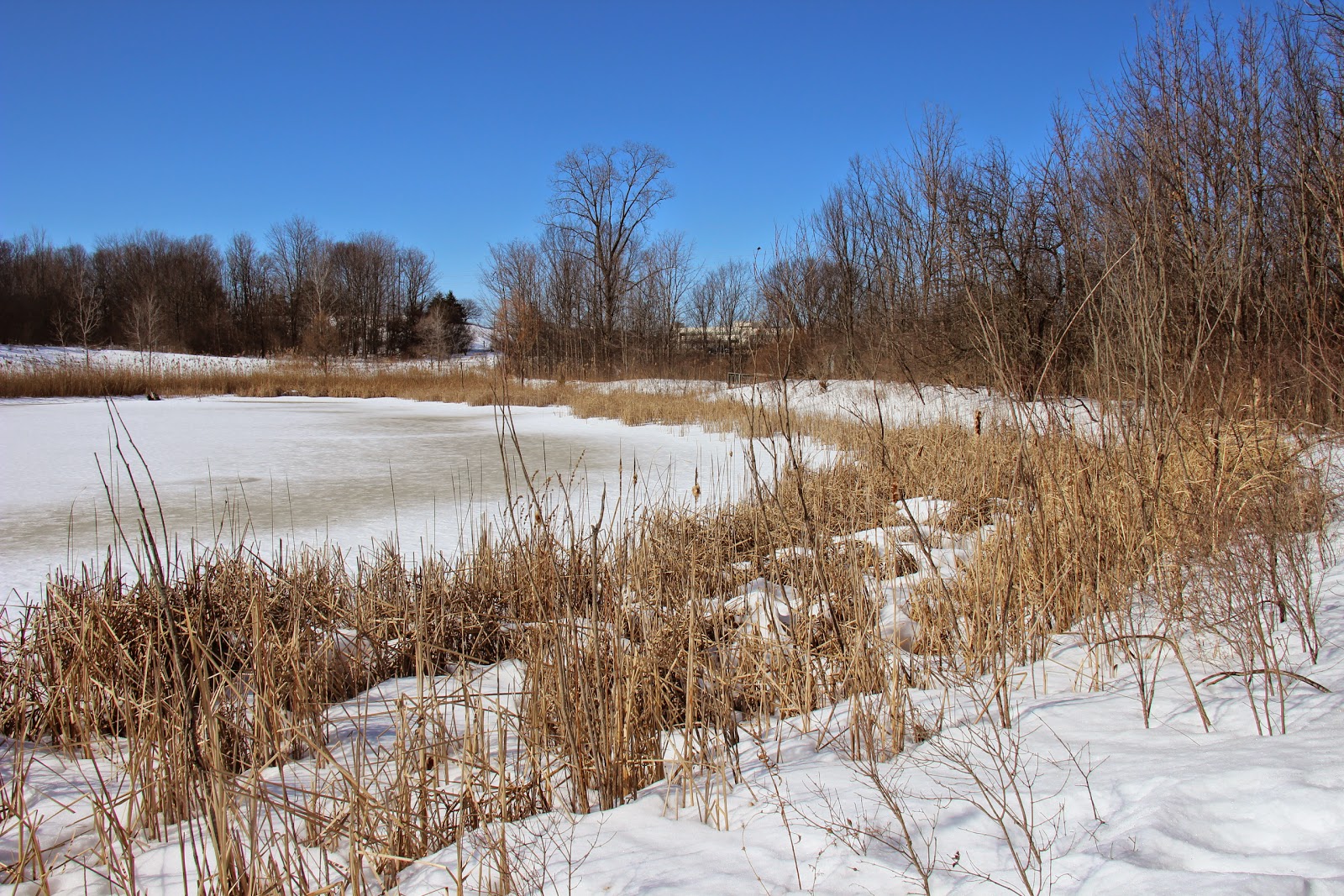 Things 10 I have done to try and survive this winter:


But it's almost over! Cheers all


Posted by Unknown No comments:

How the Most Awesome Social Network is Getting Way More Powerful

Hangouts:(Allegedly released today so keep an eye out)


The Wave of the Future: Doing Less Stuff

It seems the focus on letting the computers handle the storing, editing, and sharing of photos and videos. This let's us humans do the fun part of living life! We spend too much time managing pictures and other boring jobs.  This kind of automation is definitely the future. Google is leading the charge with impressive algorithms and central storage. This is just the tip of he iceberg of capability.

The biggest update looks to be the auto-editing of videos. Video clips, pictures, and music will all be synced together to make an edited video. I haven't taken a lot of videos, but I will soon and try and get a feeling for these new features. The demo was impressive, but they always are.

Personally I've used many of the existing Google+ features. I've found highlights and editing to be really powerful, as is image searching. If you have 500 images uploaded it will highlight the best ones based on image composition, well known landmarks, and even how close you are to the people in the shot. You can even search your photos for things like "sunset" or "snow" and related images will pop up. Even specifics like "Tom at the beach" will bring up pictures of you're circled friend Tom at the beach. Pretty powerful stuff.


PS. Above shot was taken near Traverse City with a Canon t3i, edited heavily in Google+ using drama filter (basically HDR-esque) to show off filter capability. Google considered it a 'highlight' photo!
Posted by Unknown No comments: